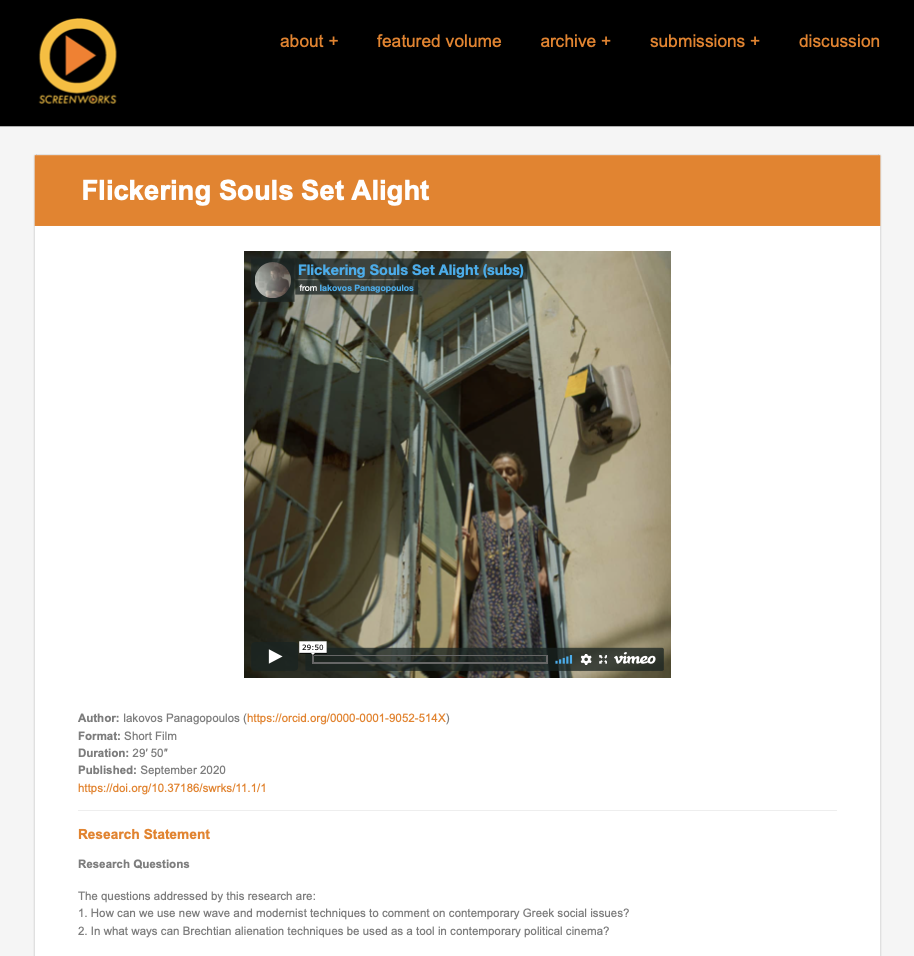 The questions addressed by this research are:
1. How can we use new wave and modernist techniques to comment on contemporary Greek social issues?
2. In what ways can Brechtian alienation techniques be used as a tool in contemporary political cinema?

The short film Flickering Souls Set Alight (2019) is the final outcome of my practice-based PhD research in the University of Central Lancashire entitled: “Reshaping Contemporary Greek Cinema Through a Re-evaluation of the Historical and Political Perspective of Theo Angelopoulos’s Work”supervised by Prof. Erik Knudsen and Dr. Gary Bratchford (Panagopoulos, 2019b; Panagopoulos, 2019a).

The film follows the lives of a three-member Greek family during the toughest years of the financial crisis. The father (Aris), suffers from ALS (Amyotrophic lateral sclerosis), is on a life support machine. The electricity company is about to cut the power supply in three days because of the huge debt and the wife (Persephone) is trying to find money since her husband is on ventilator support. In these new circumstances, Persephone and her daughter, Georgia, are in constant search of their past, reshaping their relationship with their father/husband and taking their life in their hands for the first time.

The narration of the film underlines two very important issues. The first one is the Greek financial crisis and the fact that many households, even in the poorest neighborhoods, that cannot afford paying electricity bills are in danger of getting the electricity power cut off. The second issue is about the group of people that suffer from ALS and don’t get any kind of support from the official state, while in the same time they cannot work and need constant health support. These two topics are also underlined by the sexist and patriarchal tradition of the Greek family, where Persephone is in charge of the family and takes her life in her own hands for the first time.

The main idea was to approach this topic not from a realistic point of view, even though the storyline is realistic, but from a modernist poetic approach with direct roots to theatrical and Brechtian techniques. The study and research on Theo Angelopoulos’ form and style and his connection with Brechtian techniques, especially during his first Trilogy History [Days of ’36 (1972), The Travelling Players (1975), The Hunters (1977)], changed my perspective about form and style and gave me the tools to approach this topic. Brecht’s idea of alternation of the dominant Weltanschauung (world view), which was the bourgeois theatre of the traditional narrative, with an ultimate goal to change the dominant Weltanschauung of society as a whole, helped me to give a purpose to my work (Squiers, 2014). He wanted to create theatre that the audience could no longer lose itself in catharsis and empathy. His goal was the de-familiarisation of the audience with the narration of the play (Brecht, 1978). De-familiarisation aims at making the bourgeois Weltanschauung seem unnatural and allow the material, dialectical Weltanschauung to seem natural. Brecht tried to achieve “de-familiarisation” through his much discussed “estrangement effects” (Verfremdungseffekt) (Squiers, 2014, p. 49). These techniques provide the necessary distance of the characters and the plot in order to critically analyse the story and connect it with contemporary society issues. Combining these “estrangement effects” (time jumps, estrangement monologues, non-cathartic ending etc.), with a modernist approach to filming (such us long tracking shots, attention to detail, lack of dialogue etc.), provided me with the political form to dialectically approach this topic.

For the full paper: https://screenworks.org.uk/archive/volume-11-1/flickering-souls-set-alight?fbclid=IwAR0e7CJ3CKeXaKGB3Y_0ocCSTNk3BaMoi26DHoGnbbmVdG8IXPHikDyweI4

This site uses Akismet to reduce spam. Learn how your comment data is processed.